Priorities for Downtown Waterfront I-35 Redesign

If I-35 were redesigned, how would you imagine Duluth’s downtown waterfront? We want to talk to you!

The BBER is working on a study regarding the redesign of a portion of I-35 in downtown Duluth from a freeway to a boulevard that would connect downtown with Canal Park and the waterfront.

The campaign for this redesign was originally introduced by a local community organization, the Duluth Waterfront Collective, but has since earned support from some key stakeholders, including the Duluth City Council. Per the city council’s directive to “assess the feasibility” of the proposal, the BBER received funding from the Duluth Superior Area Community Foundation to examine the potential economic effects of this redesign.

One of the goals of our research is to elicit feedback from the business community, economic development professionals, and Duluth residents to better understand what they would hope to see as part of a potential conversion, any fears or concerns they might have regarding the project, and their top economic development priorities for downtown Duluth.

To better understand the issues and to guide the design of our survey, the BBER and our partners at University of Minnesota Extension engaged with Duluthians at the Duluth Sidewalk Days Festival on July 13 and 14. Over those two days, project leaders talked with festivalgoers about their thoughts on downtown Duluth and their perspectives on which issues stood out as priorities.

Project leaders set up a table with seven jars labeled tourism, shopping and dining, housing, office/workplace, connection to the water, improved public safety, and parks and trails. Participants who stopped by the table were given a small cup with ten beans that could be distributed into the jars however the participants saw fit. People also could drop comments into a box.

In total, 362 festivalgoers stopped by the table to vote with a cup of beans. Some participants thought carefully about how they were going to distribute their beans, while others knew right away which top categories were going to get their vote.

As shown in Figure 1, improved safety gathered the greatest number of beans with a total of 784, followed by parks and trails at 701. Housing received the fewest, with 335. 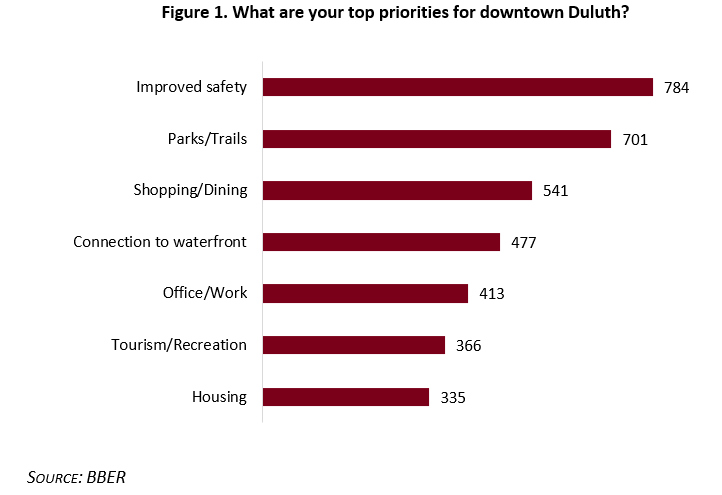 Comments from the drop box revealed that citizens were also concerned about accessibility issues, parking, homelessness, and tourism, among other issues. Examples included the following:

“[Need] bus stops on Superior and 1st for handicapped”

“Downtown [has] too many empty commercial spaces, too many street people begging and asking for handouts”

“[Duluth needs a way to get] people in and out of Duluth faster, specifically from Bayfront/DECC during huge events”

Our research is currently ongoing, and we hope to further engage with business owners, property managers, economic development professionals, and city residents who are knowledgeable and passionate about Duluth’s downtown waterfront area. We will be conducting surveys and interviews over the next few weeks. If you would like to participate, please let us know!