LSBE is hosting a Distinguished Speaker event featuring Charlene Thomas, EVP & Chief Diversity, Equity and Inclusion Officer at UPS Monday, October 24, 2022. The event includes a 4:00 p.m. reception followed by a 5:00 p.m. presentation in Marshall Performing Arts Center. The event is free and open to the public. RSVP by October 21, 2022. 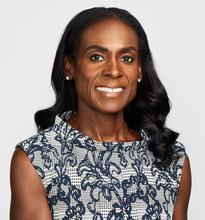 Charlene Thomas serves as chief diversity, equity, and inclusion (DEI) officer for UPS and is a member of the company’s Executive Leadership Team. Thomas leads the company's global DEI efforts both internally and externally with UPS employees, suppliers, and customers around the world.

Prior to being named Chief DEI Officer, Thomas served as the chief human resources officer. In this role she guided UPS’s transformation and HR initiatives to optimize the talent, leadership and culture for the company’s employees worldwide.

Thomas began her UPS career in 1989, progressing through successive leadership roles in U.S. Operations, including the West Chester, Pennsylvania, and Metro Philadelphia District. She served as package division manager in Baltimore and operations  manager for the Alabama District. She later joined the Desert Mountain District as West Operations package operations manager and was promoted to president, Mid-South District and later president, North Atlantic District. Thomas also has held roles in global marketing, corporate learning, and talent development as the U.S. operations training director.

Currently, Thomas serves on the board of directors for ALLETE and the National Urban League. Recently, she served on the board of Big Brothers Big Sisters of Middle Tennessee, Orangewood Foundation in Orange County, California, and as an executive board member for Habitat for Humanity. Thomas is also a member of the Executive Leadership Council and has received numerous awards and accolades for human resources and leadership. She holds a bachelor’s degree in psychology from Temple University and an MBA in business administration from Eastern University.

The series brings to campus business professionals who have insightful stories to share. These distinguished professionals present not only to LSBE students, staff, and faculty but also to the wider UMD and Duluth communities as well.

Some of the notable business people that we have hosted as a distinguished speaker include President of the Federal Reserve Bank of Minneapolis Dr. Narayana Kocherlakota, Humorous Motivational Speaker Roger Revak, President and CEO of ascena retail group, Inc. David Jaffe, and many, many others.

For more information or if you would like to present as a distinguished speaker, contact Monica Haynes, Outreach Committee chair, at (218) 726-7895 or at [email protected].

View the fall 2021 session Tribal Communities: A Nexus of Social, Economic and Racial Justice with Karen Diver, senior advisor to the president for Native American affairs at the University of Minnesota, here.