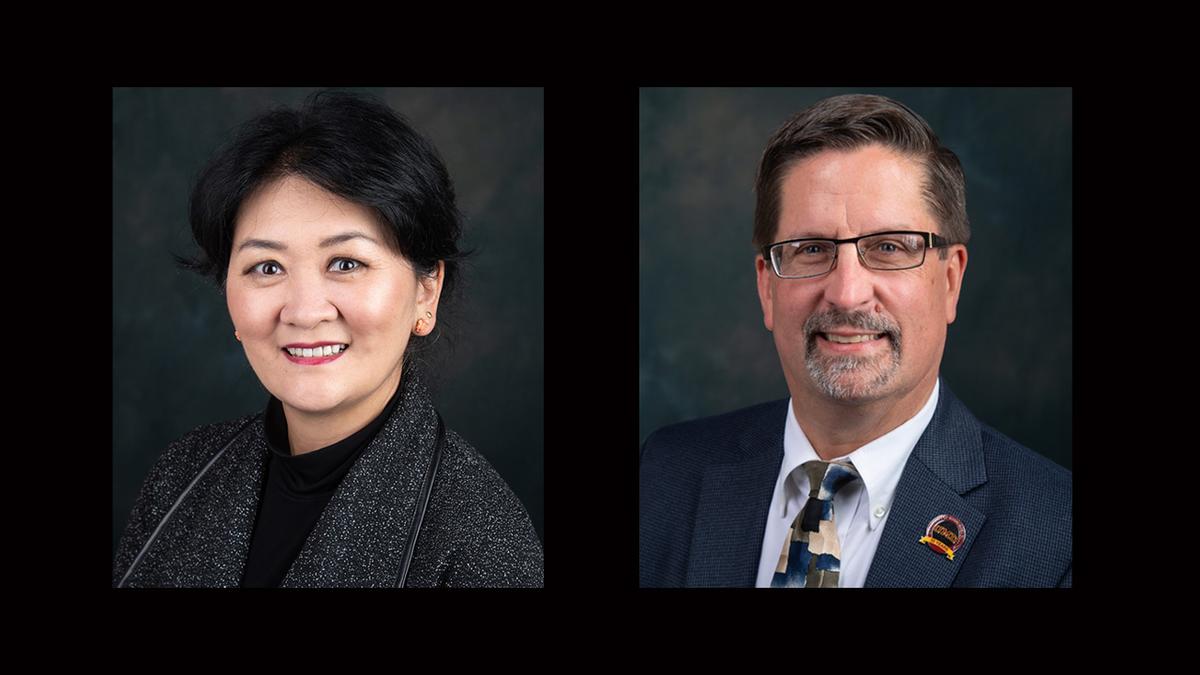 Dr. Ariuna Taivan, associate professor of economics, has been named the new Director of Graduate Studies (DGS) for the LSBE MBA program.

She succeeds Al Roline, associate professor of business law, who was DGS for the past five years, after serving 14 years as Chair of the Department of Accounting.

Under Roline’s guidance, the Labovitz MBA program has grown significantly. In Duluth, Roline was instrumental in the development of the 4+1 Integrated MBA program for current undergraduates and the Accelerated, one-year MBA program.  “In Rochester, we raised the program’s profile through an extensive local promotional campaign. That, along with hiring Rochester Program Coordinator Shanna Lunasin, helped to more than double our enrollments,” Roline said.

“I feel that the MBA Program in Rochester and Duluth is well positioned for continued success. I am confident that once this virus subsides, Dr. Taivan will be able to significantly increase international enrollments by the development of partnerships with a variety of universities across the globe.”

Taivan, who was hired at LSBE in 2012, brings a wealth of experience to her new role as DGS. She worked at the Central Bank of Mongolia for 17 years in different advancing capacities, including as an economist, senior economist, department director of Monetary Policy, and as a monetary policy advisor to the Governor of the Central Bank and chief economist, as well as having roles in the departments of Research and Statistics and Bank Supervision. She also participated in writing and amending financial sectors-related laws such as banking, central banking and non-bank financial institution laws. She is a recipient of “Leading Economist of Economics and Finance of Mongolia,” a prestigious award nominated by the Central Bank and awarded by the Government of Mongolia to economists who have made a significant contribution in their field.

At UMD, Taivan served as a co-chair of Employees of Color and American Indian mentoring program during 2016-2019. She is twice a recipient of a Best Teaching Award from LSBE. She also received a certificate for outstanding teaching and dedication to helping students learn and the LSBE Faculty Service Excellence Award. She mentors students of color as part of her service to the Student of Color Support mentoring program. She has been a faculty advisor of the International Economics Honor Society—Omega Delta Epsilon since 2012 and the International Business Honor Society—Beta Gamma Sigma since 2018, and she also serves as AP Macroeconomics exam reader/grader.

Taivan, who speaks Mongolian, Russian and English, earned her PhD and M.S. degrees in Economics from Oklahoma State University, in 2012 and 1999, and B.S. degree in Economics from Russian University of Economics in Moscow. Her major fields of study are international macroeconomics, trade and tourism, natural resource and energy economics, international finance, development and economic growth, and time-series econometrics. Her research has been published in many peer-reviewed economics journals.

Taivan will continue teaching LSBE economics classes in addition to her duties as DGS.

“This is a great opportunity to learn, expand my horizons, build the network, and bring my contribution to the success of the program,” said Taivan. “I would like to attract more international students—increase our international enrollment and increase our program’s international visibility.

“Additionally, I believe that in the context of diversity, my role will serve as motivation to many young people, students, minorities, and women.”

Roline will continue teaching a variety of Business Law courses during fall 2020 and fall of 2021 with a planned retirement in May of 2022. Having taught estate planning courses for the past decade, he plans to continue his law practice focusing exclusively on that area. “I see that as a significant need—among both my colleagues and many others of the baby-boomer generation,” he said.

More information about the Labovitz MBA can be found at lsbe.d.umn.edu/mba