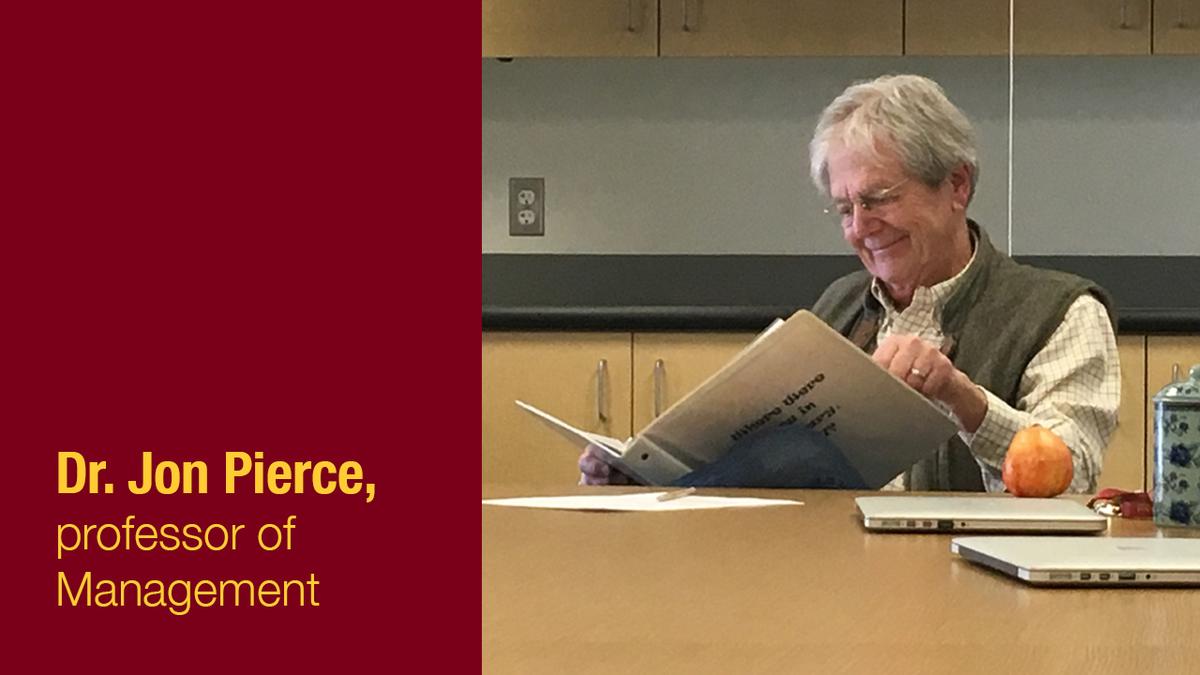 For over 44 years, Dr. Jon Pierce, professor of Management, was a driving force in LSBE’s Management Studies department.

He also was “an exemplary faculty in all three domains of his professional responsibilities—teaching, research, and service,” said Interim LSBE Dean Praveen Aggarwal.  Pierce retired at the end of spring semester.

His love and infectious enthusiasm of the Management discipline had been the impetus of many students’ decision to become Management majors. His excellence in the classroom and an unrelenting commitment to his students’ learning earned him the Horace T. Morse award, the U of M system’s most prestigious award for excellence in undergraduate teaching.

As a researcher, Pierce has had great global impact on the Management discipline with fellow researchers citing his research in their own studies over 23,000 times!  (For reference, very few faculty in business get even 1,000 citations in their lifetime.)

“Jon has been fundamental in the start and development of at least two fields of research: employee ownership and psychological ownership,” said Dr. Geoff Bell, associate professor of Management. “The latter has affected thinking in multiple fields, not only in management but also, for example, in marketing.”

Additionally, Pierce has served on the editorial board of several prestigious journals, contributed as a reviewer for the National Science Foundation, and done consulting work for clients such as Polaroid Corporation, the Duluth Police Department, and Minnesota Power.

Perhaps Jon’s most important legacy was mentoring junior colleagues as well as students. “I found him to be one of the most positive and encouraging faculty members in our department,” said Interim Associate Dean Jannifer G. David, who had been with the Management department for over 20 years, including over five as department head.

“But he also had the highest standards for teaching and research, and he held everyone accountable for those. We all have grown tremendously because of Jon.”

“I think many of us will miss the easy access to his wisdom on many topics that we had, both professional and personal,” added Bell. “He always brought clarity to any issue.”

In honor of Jon’s legacy and the countless lives he touched, a scholarship in his name was established by his LSBE colleagues as a surprise for his retirement.  The scholarship is based on student merit and offered to all students in LSBE regardless of major or year in school.  Donations to the UMD Jon L. Pierce Legacy Scholarship are welcome.