It's an age-old rivalry, but in Professional Sales and minus the fans and cheerleaders. 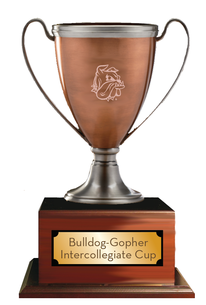 The Bulldog-Gopher Intercollegiate Cup, held this past semester (virtually), involved a team of ten students  from each school with each student playing the role of a sales representative for a major Fortune 500 company that manufactures, markets, and sells tapes and adhesives. As representatives of the company’s Industrial Business Group, the students had to call on a customer who manufactures commercial tabletops. Students identified the prospect's needs in the first meeting, presented their product in the second and third meetings, and finally tried to get a commitment from the prospect to buy the product. LSBE and UMTC alumni from several companies (see below) volunteered to role-play as buyers and serve as judges.

Kayla Nelson, rising junior and Marketing & Graphic Design and Professional Sales double major, was one of the LSBE Sales Club members who signed up to participate.

“I simply do not pass up opportunities to step outside of my comfort zone, and the Gopher-Bulldog competition was a prime opportunity for me to do so,” she said.

The sales competition was the brainchild of former interim Professional Sales Program Director, John Kratz, who has since retired, and Todd Williams executive director of the Center for Sales Leadership and Education at UMTC.

“The genesis of the idea was based on the intense in-state rivalry between the men and women's D1 hockey programs, said Kratz. “Todd and I had been sharing program playbooks and approaches for building partnerships with companies seeking entry-level sales talent.”

After Kratz’s retirement, Dr. Amin Rostami assistant professor of Marketing took over coaching the LSBE team. “It gives our students an opportunity to refine their classroom skills in exciting competitive atmospheres and get feedback from industry practitioners,” said Rostami about the purpose of competitions.

“The students were amazing, and the event could not have happened without the support and volunteerism of 3M and our other volunteer judges,” said Williams. 3M provided sponsorship for the event.

Though the competition only was only with two teams, a lot of work behind the scenes was necessary to set up an event that could be sustainable. The planning team consisted of the alumni volunteers, schools’ faculty, and students, including Nelson.

“Being a part of the small team who brought the competition from the drawing board to the playing field fueled extra passion and determination in competing, personally,” said Nelson.  “Seeing how much time, effort, and brainpower it takes to plan such an event inspired me to sink extra preparation, passion, and energy into my part as a student on the planning board and in the competition.”

Set up to be an annual sales program competition for the schools, it’s one that Nelson encourages other Professional Sales majors to join. “Without a doubt the Bulldog-Gopher competition is an excellent and unique competition that future classes should have the opportunity to partake in.”

And the score of the inaugural Bulldog-Gopher Intercollegiate Cup? Gophers 8, Bulldogs 5.

Alumni who volunteered were from the following businesses: