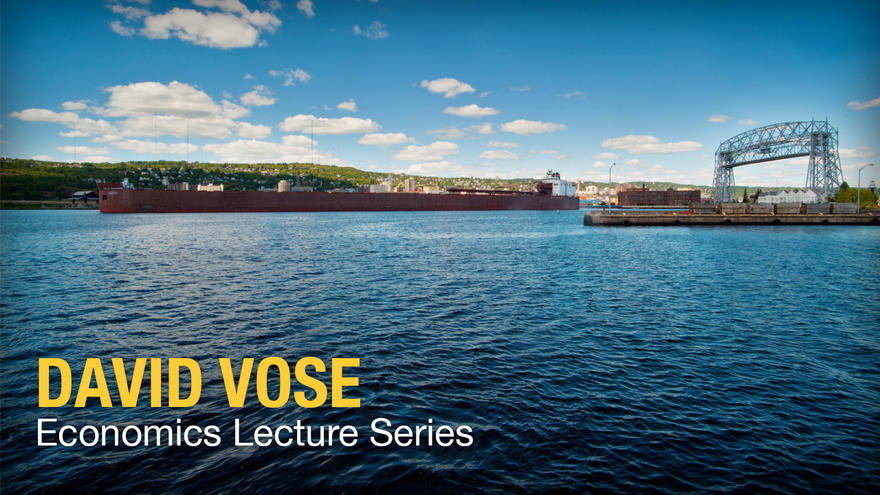 Dr. David Vose was a pioneer and visionary. His endeavors were far-reaching and impactful.

During his 36-years at UMD, Dr. Vose was instrumental in the growth of many aspects of the university and business school.

He began his UMD career as an assistant economics professor in 1966. Four years later, he was appointed UMD’s first vice provost for Academic Administration (now executive vice chancellor) where he oversaw all of the university’s academic programs. In 1977, Dr. Vose began serving as the dean of the business school. It was during this time that he chaired the committee that oversaw the construction of UMD’s first business school building, which currently houses UMD’s education department. Along with Michael Lalich and Kjell Knudsen, he was instrumental in the development of UMD’s Center for Economic Development. Dr. Vose returned to teaching economics in 1992 and subsequently retired in 2002.

With his background in economics, Dr. Vose had a strong passion for bridging academia and the business community. It was his idea of bringing notable speakers to campus where people with diverse perspectives—students, faculty, the community—could learn about economic issues of mutual interest. However, before establishing the speaker’s event, Dr. Vose passed away in 2016.

His wife of 52 years, Roberta, has picked up the reins and in honor of Dr. Vose’s legacy has created an endowment to fund the Vose Economics Lecture Series, which premieres on Friday, September 13.

“His hope was that this lecture series would enrich UMD students’ educational experiences, bring together members of the business and academic communities, and provide a unique opportunity for anyone who is interested in economic issues to hear from some of the leading voices in academia,” said Roberta.

“I knew Dave as dean, colleague, and friend from the time I was hired in 1979 until he passed away,” said former LSBE Dean Dr. Kjell Knudsen. “Dave made a significant contribution to the school through the campus reorganization. He led the conversion to increase the number of faculty to be Ph.D.-qualified and advocated for Association to Advance Collegiate Schools of Business (AACSB) accreditation. He established an effective and efficient administrative process and a collegial culture that included students, staff, and faculty.”

“He was one of the most intellectually honest people that I have ever dealt with, both inside and outside of the university,” said Morse-Alumni Distinguished Professor of Organization and Management Dr. Jon Pierce, who knew Dr. Vose from 1977 to 2016. “I admired him for that.”

Join us to hear from Dr. Robert Barro, who will be presenting on "U.S. Economic Policy: Tax Cuts, Trade Wars, and Beyond," on Friday, September 13, in UMD's Marshall Performing Arts Center. The event will start at 9:30 a.m. with light refreshments followed by the hour-long presentation at 10:00 am.

Dr. Barro has a Ph.D. in economics from Harvard University and a B.S. in physics from Caltech. He is co-editor of Harvard’s Quarterly Journal of Economics and was previously president of the Western Economic Association, vice president of the American Economic Association, a viewpoint columnist for Business Week, and a contributing editor of The Wall Street Journal. Noteworthy research includes effects of institutions, international trade, and other variables on economic growth; economic effects of public debt and budget deficits; and the economics of religion. Recent research concerns the impact of rare disasters on asset markets and macroeconomic activity with applications to environmental protection, quantities of safe assets, and pricing of stock options.