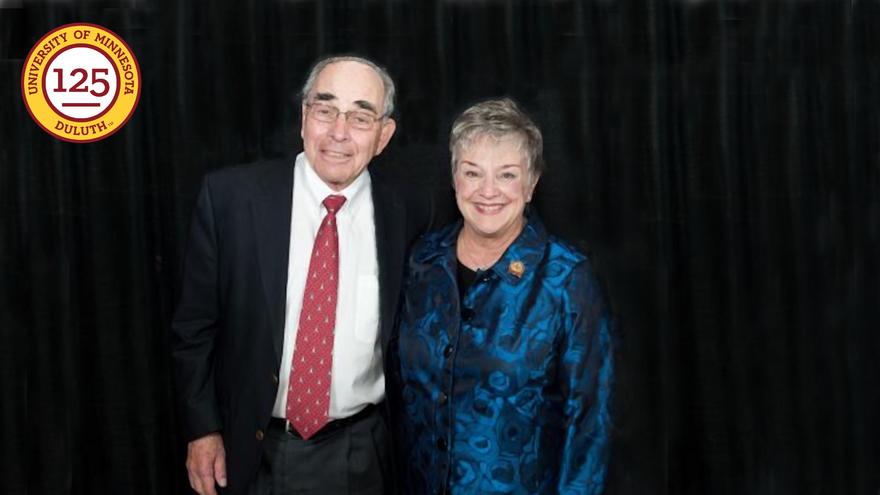 One party, local businesses, a historic ice storm, and determination.

Photo:  Joel Labovitz and Elaine Hansen at the 20th annual Joel Labovitz Entrepreneurial Success Award Ceremony. Joel Labovitz is founder of Labovitz Enterprises, an investment firm. Previously, he was president and CEO of Maurices, the retail clothing company founded in 1931 by his father, Maurice Labovitz.

Elaine Hansen was working with a lot of ingredients when she cooked up her plan to make the 25th annual Joel Labovitz Entrepreneurial Success Award Ceremony a memorable event.  But, when she chose April 26, 2017, she didn’t expect an ice storm.

The storm was so bad, Elaine considered cancelling the event, but as the morning progressed people kept calling to say they were coming. “If there was anything that could have gone wrong that year, it did,” Elaine says.

Carol Valentini, of Valentini’s Restaurant, was going to be presented with the LSBE Business Person of the Year award, and at first, many of the participants had cancelled. When Carol’s son walked into the hall, Carol cheered.  Then, Elaine knew it was going to be alright. “It turned out to be a phenomenal event.”

Elaine was the force behind making the awards so successful. “No one had ever done this before.” she said. The ceremony recognized micro-entrepreneurs and emerging, established, and mature entrepreneurs. They gave a special honor to an environmentally engaged entrepreneur and a “Generations of Success Award” to honor a long-time company.

Elaine was working as the director of UMD’s Center for Economic Development (CED) at the time. She also served as the regional director for the Northeast and Northwest Minnesota Small Business Development Center.

Organizing the party that day was just one of Elaine’s many duties. Most of the time, she was helping to establish and grow local businesses in the Duluth area. Elaine and her staff went on hundreds of visits, from working with larger businesses like a growing aircraft company to smaller-scale enterprises such as a specialty florist.

Elaine brought a whirlwind of force to UMD and everything else that she did in her career. She was awarded the 2016 University of Minnesota President’s Award for Outstanding Service, as well as the Women in Business Champion of the Year for the U.S. Small Business Administration's Minnesota District Office in 2009. The accolades were well deserved. Her assistance was shared by minority-owned and women-owned businesses and along the way, she became a role model for many.

Before Elaine was an award-winning business woman, she was a Bulldog. Elaine says, “I graduated from Duluth Central High School on a Friday night in 1966 and started at UMD as an undergrad the following Monday.” Read more.